History of The Commando Memorial.
Early in 1947 many members of branches of the Commando Association felt that some form of Memorial should be put up in Scotland. It was agreed the most appropriate spot would be in the area of the former Commando Basic Training Centre at Achnacarry. Mr William Gilmour Smith JP of Glasgow advised the Association that a strong representative Committee had been formed with the intention of inviting the Scottish School of Sculptors to submit designs.
Douglas Bliss and Dr Tom Honeyman were responsible for drawing up the conditions of the test, and the artists were given 8 months to complete their designs. In all 26 designs were submitted, and these were exhibited in the Glasgow School of Art on the 28th October 1949. The Committee came from all over the country to judge the exhibits.
They were unanimous that the design by Mr Scott Sutherland, who was an Art Teacher at Dundee College of Art, was the most outstanding work, and they all felt would be a fitting symbol of all that Commandos stood for.
It took another two years to prepare the clay and plaster casts for the Foundry and complete the castings in bronze. The actual figures are 9 feet 4 inches high, and the finished memorial approximately 17 feet high. In the early stages a site was chosen above the lock gates at the Caledonian Canal on the actual road to Achnacarry, but this site was afterwards abandoned because of unforeseen difficulties. It was felt too, that as the memorial would be two and a half miles from the main Inverness Road, it was too far off the beaten track.
At this stage Lord Lovat was successful in having a suitable site generously donated by Mr McDonald of Speanbridge. The site commands a wonderful view. It is situated at the junction of the Gairlochy Road, and the main Inverness to Fort William, about three quarters of a mile from Spean bridge, at the top of the hill.
The Memorial was unveiled by Queen Elizabeth the Queen Mother on Saturday 27th September 1952. There was no parade or ceremonial drill, the Queen Mother expressing a wish to walk through a line of Commandos on the way back to her car. 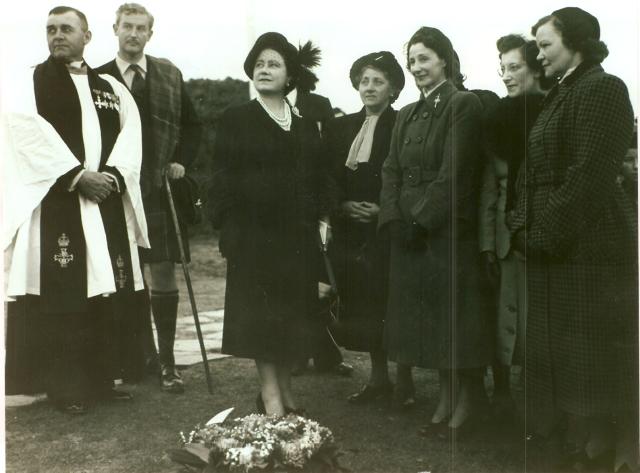 A simple Area of Remembrance was later opened adjacent to the Memorial which was extended in recent years. Here Commandos and their families can lay small tributes to loved ones. There is also an area for scattering of ashes. More information can be found [HERE]. 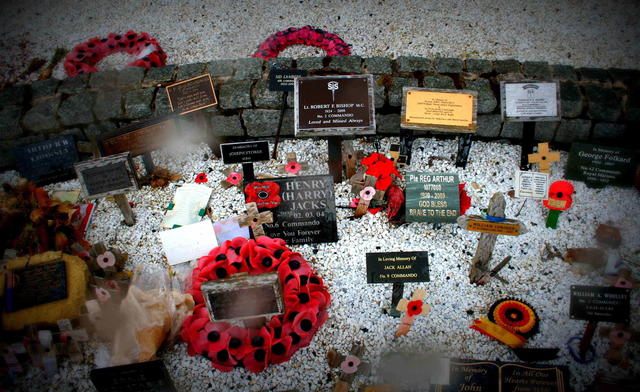 At Spean Bridge, as at Westminster Abbey, an annual act of Remembrance was arranged, the first being on Sunday the 8th November 1953. Over the years this ceremony has become a very important one, not only for the residents of Lochaber, but for the hundreds of Commandos, their families, and their friends, making the pilgrimage to the area.

In 1957 the Town Council of Fort William agreed to arrange future services at the memorial, and also to be accountable for its future care and upkeep. The close links between Lochaber and the Commandos have been maintained ever since, and in 1993 the Lochaber District Council bestowed on the Commando Association the very great honour of the Freedom of Lochaber. This was presented to the Association on Saturday 13th November 1993. The following day a special plaque was unveiled By Brig. K.R.S. Trevor CBE, DSO, on the Memorial giving a short history of the Commandos.
Naar ander recent nieuws
Naar ons nieuwsarchief
WORD ONZE VRIEND
TERUG NAAR HOME PAGINA